Here we go again with another round of Soap Challenge Club! Yippee! But, GUESS WHAT??? Finally, this is a technique that I’ve actually ALREADY practiced many, many times: the spoon swirl. Woohoo! As much as I love learning new techniques, it’s also really fun to revisit the familiar. 😉

I chose to use the new-to-me fragrance Champagne Sugar from thesage.com (this month’s sponsor) for this challenge soap. It smells divine! I especially love using fragrance oils from Majestic Mountain Sage because they are super concentrated (I typically only use .25oz per pound of oils), and seriously, every. single. oil. I’ve gotten from them has smelled fabulous! They stay strong and true in cold process soap every time.

Befitting the fragrance, I used 100% champagne as the liquid instead of water. I’ve used champagne in soap several times, so I knew it would speed up the reaction, causing a thick trace really quickly. Because the spoon swirl technique doesn’t require super fluid soap, I didn’t think it would be a problem. My only concern was getting air pockets in the middle of the loaf if it really set up too fast.

{Side note: What’s really cool is that I’m now able to combine many different things that I’ve learned with ease and even a bit of comfort, knowing what to most likely expect, and not being completely intimidated by the whole process! Don’t get me wrong; there are still hundreds of techniques and fragrances and oils and colorants and additives to try. I’ll NEVER get too comfortable with all this stuff, and I’ll ALWAYS be intrigued by the process! I’m just excited to have come so far since those first batches of soap!}

I began by adding a tiny bit of lye very slowly to super cold, flat champagne. I was hoping to keep the champagne from super-heating and turning deep brown, but that didn’t happen! Even in an ice bath. Check out the color morph as I continued to add the lye to the champagne:

Champagne after adding just a few teaspoons of lye. 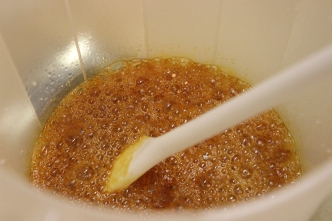 A bit of boiling after adding about half of the lye, which made me move the pitcher to an ice bath!

I left the champagne lye solution in an ice bath while I prepped the oils and colorants. Since this fragrance is pretty feminine, I chose to use pink sparkle mica, lavender oxide, and gold sparkle mica to color the soap. I also added some white sparkle mica pencil lines between several layers to try to add some more champagne fizzy sparkle inside the soap. This recipe was almost 4 pounds of oils, making a 5-pound loaf of soap. When the lye solution was at 75 degrees and oils were at just over 100 degrees, I began mixing. I was careful not to stick blend too much or too long, using only very short bursts while stirring, and watching it like an hawk! I poured off just over half a cup of soap for pink and purple, just under half a cup for gold, and then added about 4 teaspoons of titanium dioxide to the main batter which was a deep tan color.

The main soap batter just after adding the titanium dioxide. Super dark batter thanks to the brown sludge lye solution!

It was rapidly setting up as expected. I had to work quickly to whisk in the colors and fragrance. The consistency when I poured and spread it into the mold was very similar to royal icing! I layered in some of the main batter, then pink, then a white mica line, then purple with another white mica sprinkle.

Believe it or not, this is the pink layer with white sparkle mica sprinkle on top. I was hoping the pink would lighten up as the soap did its thing.

Here’s the purple layer with more white mica on top.

A layer of gold soap added

Next came more main batter, some gold (which I literally had to plop and spread like icing), and another white mica line. Finally came the last of the pink and purple colors and the remaining main batter. Because the soap was so thick, these were most certainly messy layers!

I used a large soup spoon to make my swirls, reaching all the way to the bottom of the mold and pulling the soap in a figure 8 motion to the top of the mold. I did a figure 8 every few inches or so down the entire length of the mold. Then, I came back down the center of the mold for one final swirl. (No pictures for this step. Too messy!) And THEN, I beat the heck out of that soap! I tamped the mold on my counter until I almost knocked a picture off a shelf hanging on the adjacent wall! Then, I moved the mold to a (safer) rug on the floor and tamped it some more! I really didn’t want any big air pockets in this soap. Once I felt I’d beaten the soap into submission, I finished it off with a few dots of gold soap and white sparkle mica in olive oil. I used a skewer barely inserted into the soap to randomly swirl the top, and then I had to bang that mold some more! Yeesh! (I must note that I made this soap during my youngest’s naptime while the other kids were at school. I can’t believe it, but she slept through all the noise!) And just because fragrances like this one beg for more sparkle, I added irridescent glitter!

Champagne Sugar soap in the raw. Such sparkly yumminess!

This is one soap that I did NOT put into a warm oven. Alcohol heats up so much that I left this one out in the cool air. After only about 12 hours, the soap was ready to cut! Take a look:

No major air pockets! All that beating and banging worked! I’m surprised at the final color of the soap. I was expecting the base to remain pretty tan, but it turned into a lovely creamy white.

As usual, the swirls in the bars are all completely different!

The swirls turned out nice and wispy, and they aren’t too “strong” if you know what I mean. I was going for gentle, dreamy swirls with a bit of sparkle, and that’s what I got. Here’s an uber-close-up shot so you can see the sparkles a bit better.

The white sparkle mica lines are more distinct here, especially between the lower pink and purple layers. You can also see the gold sparkles. So difficult to capture with a camera! In person, the sparkles are much more prevalent!

Do I detect more hearts? Can you see them? Check out my previous post to see more soapy swirly surprises.

Love it when soap turns out like I hoped. This was a fun one to make. The scent is feminine and clean, and the sparkle micas add something fun and whimsical. Thanks, Amy, for another fun challenge! We’re sure to see lots of creativity and beautiful swirls!