Need some soap for the man in the house? Check this one out!

My husband’s friend asked if I could make soap out of lager, so I came up with this recipe just for him! He even provided the Guinness Black Lager! I’ve made a few batches of beer soap and even champagne soap, but this thick, dark liquid was a different beast.

I began by opening the bottle and letting it sit for two weeks to flatten in the cold garage. It’s been so crazy cold around here that it was almost frozen! I poured the whole beer into a tall pitcher, and the lack of bubbles told me that it was flat enough to make a lye solution. With the pitcher sitting in an ice bath, I slowly added the lye over a period of about 15 minutes. It would fizz a bit with each addition of lye, but it never even thought about volcano-ing. (I think I just made up a new word, only useful for soaping!) By the final addition of lye, the whole solution was the consistency of very dark, very thick syrup. Stinky syrup, mind you! The heat produced by adding the lye makes the sugars in the alcohol almost scorch. Lye solutions are typically stinky anyway, but using black lager made it exponentially worse! My aversion could be due to the fact that I don’t like dark lagers to begin with! My hubby didn’t mind the smell nearly as much as I did.

As I was slowly adding the lye to the beer, I was also measuring out and melting my oils. I decided to add some local beeswax to this batch of soap to make it harder, therefore longer lasting. I used only 2% wax, but I can already tell a difference in the hardness of the soap (now 4 weeks after making it).

Because alcohol soaps tend to thicken very rapidly, I had planned to let the lye solution and oils cool down before mixing up the soap. However, wax has such a high melting point that it began to solidify in the oils soon after I’d melted everything. I ended up making the soap at high temperatures, meaning it traced very quickly. I hardly used my stick blender at all for this one!

Working quickly, I split off a small portion of soap and whisked in titanium dioxide to lighten up the color. I poured the deep tan main soap batter into my mold, then added the lighter tan soap on top and made some peaks to form a “head” on this lager soap. I put the soap to bed as usual in my warm oven, but I watched this one closely to make sure the addition of alcohol didn’t make it boil and bubble out of my mold! Again, no problems at all! The soap came to a full gel faster than my other water or milk soaps, but it didn’t crack or volcano in the slightest. 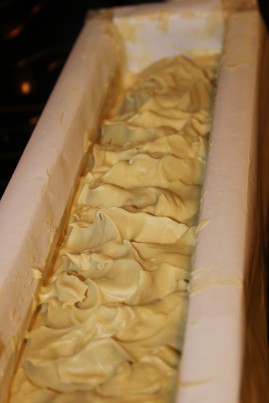 And here’s the loaf of Black Lager Soap the next day. The peaks remind me of meringue. Yum!

After unmolding the soap, the smell of the lager was still quite strong. And it no longer smelled burnt, but was more smooth, much like the original scent of the lager. I was hoping that scent would stick, but I’m finding that it’s dissipating a bit as the soap continues to cure. The lather of this soap is rich and luxurious, and the wax has most certainly hardened the bar.

Check out the striations in the front bar. It looks like the beer is settling, right?! So cool!

I’m grateful for the suggestion and gift of lager that pushed me to make this fun soap! And I’m thinking this definitely isn’t just for men! With it’s rich, creamy lather, this might make a fantastic shaving soap. I’ll test it out and get back to you! 😉