This month’s Soap Challenge Club was most definitely a challenge for me! First of all, my five kids passed around a cold virus during the last month. Yes, it took a full 3 weeks to hit all 5 kids, and a total of 5 weeks for everyone to get well. It was a doozy! Everyone had high fevers with terrible coughing and runny noses. Lots of all-nighters pulled around here, and we’re still not back into a good sleep schedule!

Because of all that, I took a couple of weeks off from soapmaking. I’ve been itching to get back to it after seeing the beautiful soap created by Vinvela Ebony on her blog Dandelion SeiFee, as well as the examples made by Amy Warden, creator of the Soap Challenge Club.

The Dandelion Zebra Swirl is October’s challenge technique. After watching Amy’s great tutorial, I really didn’t expect it to be that hard. But alas, I found this one to be very difficult! To make this soap, I was simply to pour one color of soap into the mold, insert a flexible cutting mat into the mold, pour different colors down the mat to form stripes, and then remove the mat and pour the remaining soap batter to fill the mold. My problem didn’t come with the actual pouring technique, but with the consistency of the soap that I was trying to pour.

Amy suggested using a recipe that was slow to trace as well as a fragrance that isn’t too floral or too spicy. I altered the slow-moving recipe a bit to accommodate the oils that I had on hand, using 35% olive oil, 30% palm oil, 25% coconut oil, 7% sunflower oil, and I also added 3% castor oil because I really love how it boosts lather. I’ve never used this recipe before, so I didn’t really know what to expect. I also added yogurt to the oils as 50% of my liquid.

My first problem: I was making a total of 3 batches that day. Result: I accidentally used the wrong bowl of oils to make my first attempt at the challenge soap! It was my regular soap recipe which has more castor oil as well as avocado oil and shea butter, and it tends to trace pretty quickly. I blended the lye solution and oils (both at room temperature) for just a hair too long and everything got hot and thick really fast! The scent I used was Pixie Dust, and I think it may be a hint too floral as well, perhaps aiding the quick trace. And of course, I didn’t realize I’d used the wrong bowl until I’d already added the fragrance and started coloring the soap.

Here’s a look at pouring my first attempt of the Dandelion Zebra Swirl.

See how the soap is too thick already!? And it’s only the first pour… Uh oh.

Half way through my “zebra” stripes, and the soap was beginning to pile up. I like the colors, though!

Last “pour” of the main soap batter, and look how thick it was! I had to glop it on top and then use a spatula to scrape all the soap down the mat as I pulled it out of the mold.

The top turned out beautifully, even if I had no idea what the inside would look like! Of course I christened the soap with pixie dust, a.k.a. iridescent glitter. My girls love how sparkly it is!

Somehow, like usual, the soap turned into soap and the result isn’t nearly as terrible as I expected. Just because it didn’t go as planned doesn’t mean it isn’t a work of art! 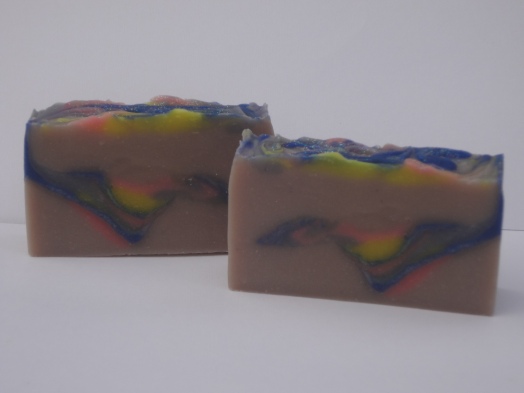 Look at the picturesque mountain sunset depicted here. This cut of Pixie Dust scented soap is beautiful! The colors in person are quite striking. 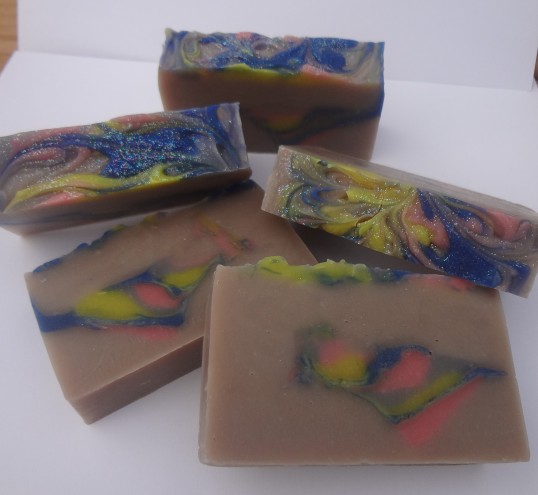 Here’s another view showing the bright colors and shimmer on top of Pixie Dust soap.

After using the wrong oils as well as using up the fragrance that gave the color and scent combo I imagined, I had to rethink my plans and try again. My second attempt at the Zebra Swirl technique turned out better, but still not quite as easy as I’d have liked. Even with my version of the slow moving recipe, the soap still traced faster than I wanted, and I was unable to get the very fluid pour that Amy had in her video. I had to tamp my mold down after some pours to get the soap to slide down the mat, and at times I had to use a spatula to push it down.

This second attempt is made with Blowing Bubbles fragrance oil. Inspired by the iridescent qualities of bubbles, I chose to color the soap with aqua, blue, purple, pink, and yellow. Like the first soap, I used yogurt as half of the liquid in this recipe as well.

The first 2 stripes of Blowing Bubbles being poured onto the mat. Thinner than my first attempt, but still not as fluid as I’d like.

The first set of stripes are complete, and the colors are quite striking! 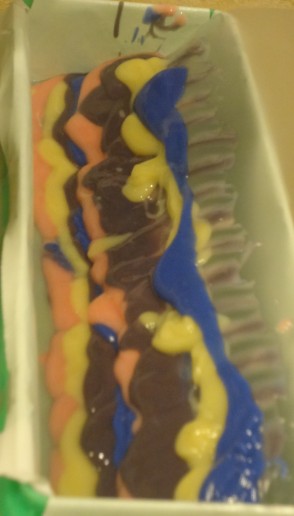 Getting to the end of the zebra stripes, and I’ve begun tamping the mold and scraping soap down the mat again. 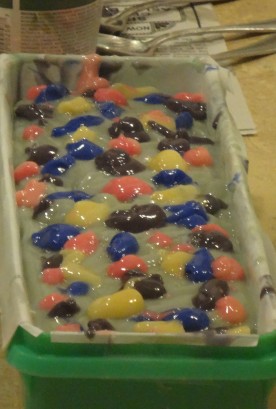 I really look forward to topping soap with pretty colors!

Is there anything more fun in life than making pretty swirls on top of soap? Ok, yes. But it really is fun!

Once again, it was difficult to let that soap set up in the mold. I couldn’t wait to see how the inside turned out! It doesn’t look as clean as the examples, but it turned out pretty. I have yet to figure out how Vinvela got her colored stripes all on one side of the soap! Maybe my cutting mat was just too flexible? Or maybe I didn’t pour enough soap in the bottom of the mold first? I’m thinking I didn’t pour enough main batter soap behind the mat before I removed it from the mold, but I’m not certain. Any suggestions you might have are very welcome! 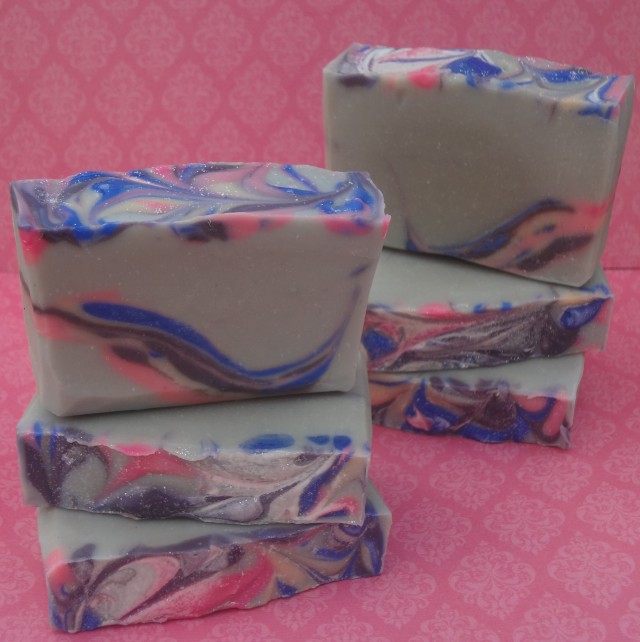 Blowing Bubbles soap made with the Dandelion Zebra Swirl technique.

Look, Ma! Two whales kissing! (I had no idea I could create such cool artwork in soap!)

All in all, this was a fun challenge again. I learned a lot, and I’ll keep trying to perfect this technique. I’m going to try some other slow moving recipes to see if I can get the correct consistency for this type of swirl. As usual, I’m really looking forward to seeing what everyone else created! Thanks for stopping by!